We at Baros Vision are proud to announce that our BV9900 and BV3500 glass railing systems have been selected for one of the most significant and innovative projects in the world in recent years – the European Spallation Source (ESS) for neutron research. It will be the newest and most modern particle accelerator in the world when the first scientific programs start in 2023.

As one of the world’s leading research facilities, ESS will present an attractive, functional, and safe work environment, complemented by a unique architectural design. The completed project will have a significant impact on the world’s research scene.

The design and construction of this large-scale and significant project are in the hands of Skanska. They are a multinational architectural and construction company based in Sweden. Skanska is the fifth largest construction company in the world according to Construction Global magazine. Some of Skanska’s most notable projects are the renovation of the United Nations (UN) headquarters, the World Trade Center Transport Center project, New York’s Pennsylvania Station, London’s remarkable “Gherkin” commercial skyscraper, and more.

Most of the buildings in ESS will be technical with industrial nature, which imposes limitations and challenges on architectural design, as the visual impact of the facility and its integration with the surrounding landscape are vital.

The completed complex will be huge and will include industrial and laboratory buildings, office spaces, guest accommodations with a capacity of up to 3,000 scientists and researchers per year. ESS will be a research center with innovative architecture that is in tune with the surrounding landscape. The architects’ efforts are aimed at providing an attractive workplace for more than 500 employees, with a pleasant and comfortable environment for staff and visiting researchers.

Among the main goals of the project is to create a design that will be convenient and seamless, allowing an efficient and safe flow of people and materials in the complex. From the set, ideas are also the convenient transportation to the individual access points and optimization of the use of the internal space of each building.

The architects from Skanska have chosen our side-mounted glass railing with spiders BV3500 for future office spaces where both administrative and research departments will be located. The modern look and the exceptional strength of the fit perfectly in the overall design set out in the ESS. 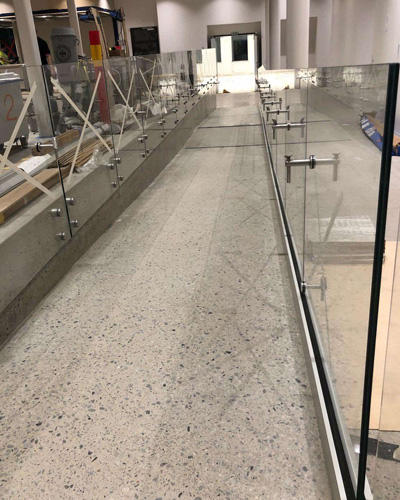 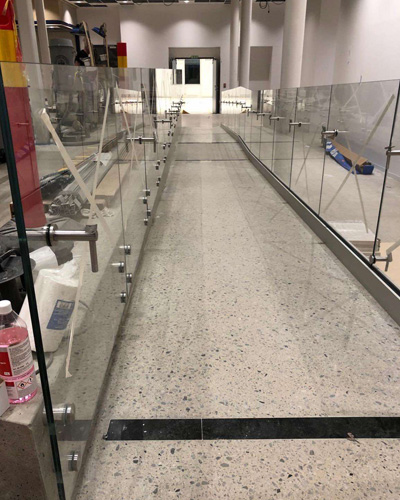 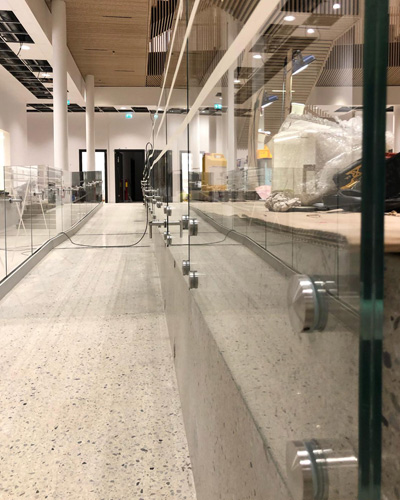 Our latest adjustable profile for glass railings BV9900 has been selected for a number of balconies, roofs, and entrance spaces, in buildings located in the research complex. The BV9900 fits perfectly into the clean design of the project. The glass railing system offers easy and safe regulation, unobstructed view, and complete security when using it with its strength of 4kN. 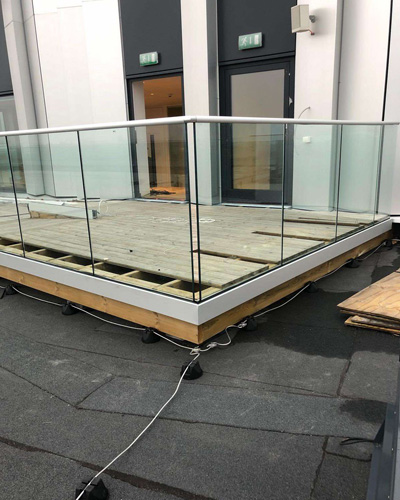 More about the European Consortium for Research Infrastructure – ERIC.

The European Spallation Source is a multidisciplinary research facility that will be the world’s most powerful pulsed neutron source. This research campus is currently under construction in Lund, Sweden. A total of 13 EU Member States (Czech Republic, Denmark, Estonia, France, Germany, Hungary, Italy, Norway, Poland, Spain, Sweden, Switzerland, and the United Kingdom) will take part in the construction and operation of the ESS. 2023 is the year set for the start of the scientific programs, and by 2025 the construction of the project will be fully completed.

ESS will be a new generation and the most powerful source of neutrons in the world. It will allow scientists to see and understand much more about the basic atomic structures and forces, on a scale and duration unattainable at the moment with other neutron sources.

The main function of ESS

ESS will use spallation – a process in which fragments of material (residues) are separated from the body due to impact or stress. The future device is composed of a linear accelerator in which protons accelerate and collide with a rotating, helium-cooled tungsten target. During the process, the intense pulses of the neutrons are emitted and taken through beamlines to experimental stations, where research on various materials will be performed. This will help scientists to discover and develop new materials with applications in pharmaceuticals, aerospace, manufacturing, engines, plastics, energy, telecommunications information technology, biotechnology, and transportation. The ESS is designed to be carbon neutral and is expected to reduce CO2 emissions in the region.

The Lund research complex will have the most technically advanced particle accelerator in the world and will definitely contribute to the global development of atomic physics. Detailed information about ESS can be found here.

More from our blog

Ideas for your glass railing

Ideas for your glass railing  Whether it’s new installing or replacing an existing railing, when you’ve worked hard to create and fund your project – you deserve the best

How to Choose the Right Glass Railing for Your Project?

How to Choose the Right Glass Railing for Your Project? When it comes to glass railings, there are a few things you need to consider before making your purchase.